I was is a lazy mood today.  I had no motivation to do the shopping so I took a look at what I already had (which in fact was very limited). I was delighted to discover this simple recipe.  Possibly the name of shakshuka is not known to many, but as exotic as it sounds you will learn that it is in fact far from unusual but when I explain to you what it actually is, you will want to try it as soon as possible. In fact, you have probably enjoyed a similar dish,  it is just a few eggs with red pepper and tomato after all. 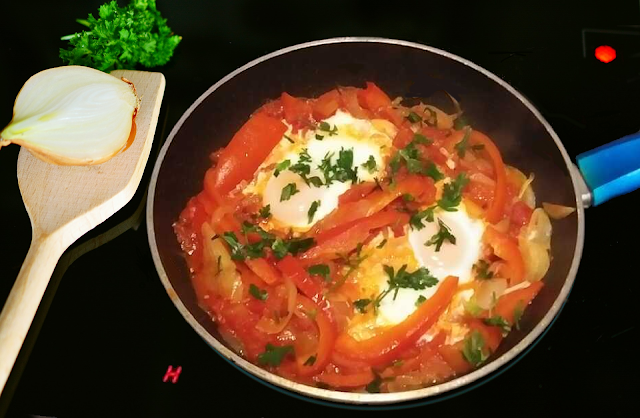 Shakshuka is defined as poached eggs in a tomato sauce with onions and chilli.  This is a traditional dish of Arabian cuisine, although there are similar recipes in other gastronomic cultures like Spanish and Mexican. The particularity of this dish is that it is usually served directly in a tajine or frying pan. There are many variations and it is served both at breakfast and at dinner served simply with fresh bread for dipping.
Prep Time: 10 mins
Cook Time: 20 mins
Serves: 2
Ingredients:
1 tbsp olive oil
1⁄2 large onion, sliced
1⁄2 red or green pepper, deseeded and sliced
1 small red chilli, deseeded and sliced
200g canned chopped tomatoes
1 tsp caster sugar
salt & freshly ground black pepper
2 eggs
small bunch parsley, roughly chopped
Instructions:
1. Heat the oil in a heavy based frying pan.  Stir in the sliced onion, red or green pepper and sliced chilli.  Cook until they begin to soften.  Add the chopped tomatoes and sugar and mix well.  Cook until the liquid has reduced and then season.
2. Using a wooden spoon, create two pockets in the tomato mixture and crack the eggs into them.  Cover the pan and cook the eggs over a low heat until just set.
3. Sprinkle with parsley and serve from pan
cooking eggs food recipes red pepper shashuka Turkish food 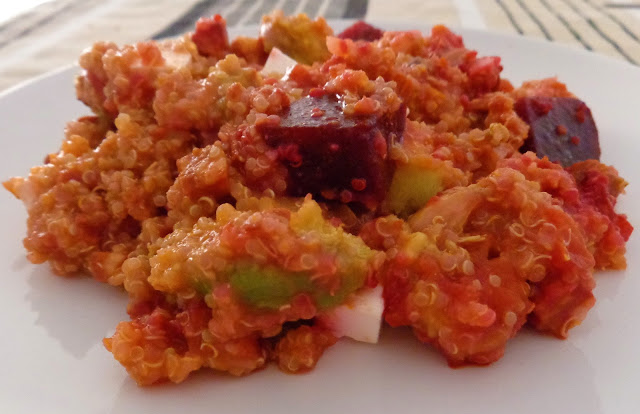 I have cooked many risotto recipes in my time but when asked if I'd ever tried this I went as red as a beetroot.  I was embarrassed because I'd not even considered using such a sweet vegetable in a risotto before; smoothies, soups, salads, even cakes, yes, but never had I even thought of a beetroot risotto. Quinoa was used here instead of risotto rice. It is quite similar to risotto rice in texture and the avocado adds even further to the softness.  I wanted to make use of the remaining avocado from the few I had bought for an  avocado and lime cheesecake , and it worked here like a treat. This recipe has so many delightful elements - the soft quinoa, the sweet beetroot, the spiciness of the cumin and of course, the rich texture of that delightful avocado. It is served at room temperature, or even as a cold salad but the outcome is very, very pleasing. Prep Time : 15 mins Cook Time : 20 mins Serves : 4 Ingredients : 160 g uncooked quinoa 250 ml tomato juice 25 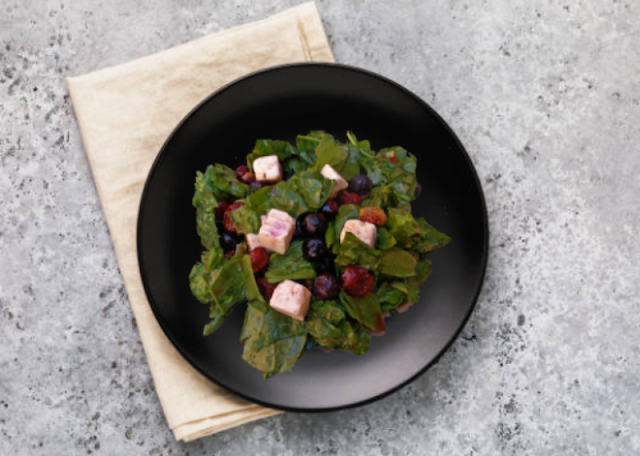 It is January and I am still in a jolly mood.  Following on from my pan-fried gnocchi post last week, I thought I'd put some of the the leftover frozen cranberries to good use.  My wife loves   salads , anytime of the year, simple or otherwise, so I'm always looking for new options to combine ingredients and have more variety. This one is perfect to start the new year because it uses ingredients that are easy to find in the winter season.   I know, it's one extra step to toast some walnuts and scatter on top  It only takes a few minutes but is well worth the effort.  You will love the crispy bits around the edges and  the aroma is kind of magical! Prep Time : 15 minutes Cook Time : None Serves : 4 Ingredients : For the salad : 3 large handfuls of fresh spinach 50g dried cranberries 75g blueberries (fresh or frozen) 100g feta cheese 50g walnuts (toasted, if preferred) For the dressing : 1 tbsp olive oil 1 tbsp water 2 tbsp honey 2 tbsp balsamic vinegar Instructions