May 06, 2019
Don't you just love worldwide cuisine. I do, French food included.  I've not been there, nor do I speak a word of  the language.  This is justified by my pronunciation of Niçoise.  Trying to act like I knew it all, I had always pronounced it nee-coys. I've been told that there is only one legitimate way of pronouncing it, related to being a native of Nice which is nees-waz phonetically, which made sense really. 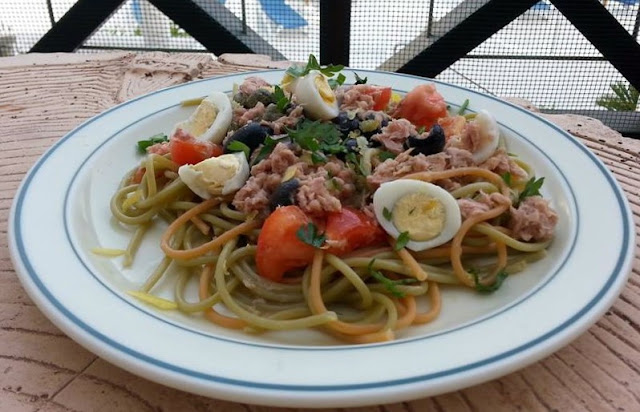 It many only be a salad but it is far from just  that with it's pungent array of flavours that tick a few of of the the boxes - sweet with the tomatoes, yet bitter, with the black olives, salty with the tuna and anchovies, sharp with the dressing.  Is that a good enough description? 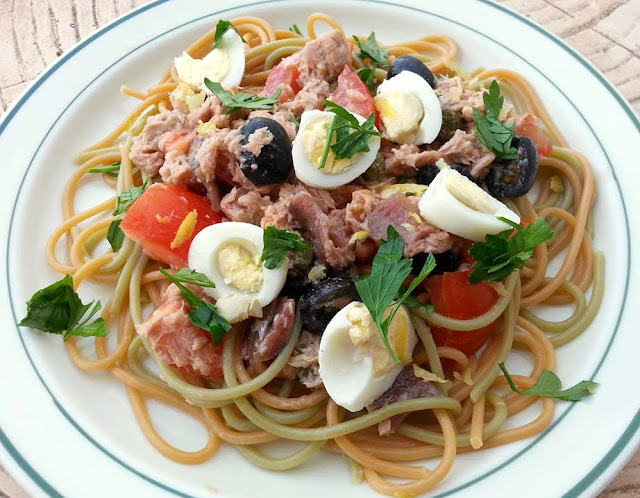 Instructions:
1.  Cook spaghetti in plenty of salted boiling water as directed by package instructions until el dente.
Strain well and return to pan to keep warm.

2. Meanwhile, place the quail eggs in a saucepan of cold water. Bring to boil and cook for 4 minutes.

Drain, cool and remove shells. Slice each egg in half and set aside.

5. Divide spaghetti between 4 plates and spoon tuna mixture on top.  Divide the egg halves between each plate and sprinkle with fresh parsley.